The main character in the play Oedipus the King by Sophocles is Oedipus, who is a tragic figure as he has unknowingly killed his father and married his mother. Jocasta is Oedipus’ wife and mother. She often tries to be the voice of reason for Oedipus, but she ends up killing herself when she realizes the truth about Oedipus’ past.

Creon is Jocasta’s brother and Oedipus’ friend. However, the two have a falling out because of the prophecies of Tiresias, and Oedipus actually accuses Creon of conspiring with Tiresias against him. Other characters include the messenger of Corinth and the shepherd both bring news to Oedipus and lead to him uncovering the truth about himself, while the priest talks about the plight of the people and the curse that lies on the town. The chorus has an important role in the play, as they represent the voice of the people of Thebes.

Below, you have a character map that will explain the main players in the tragedy and their relationship to each other and to other characters. 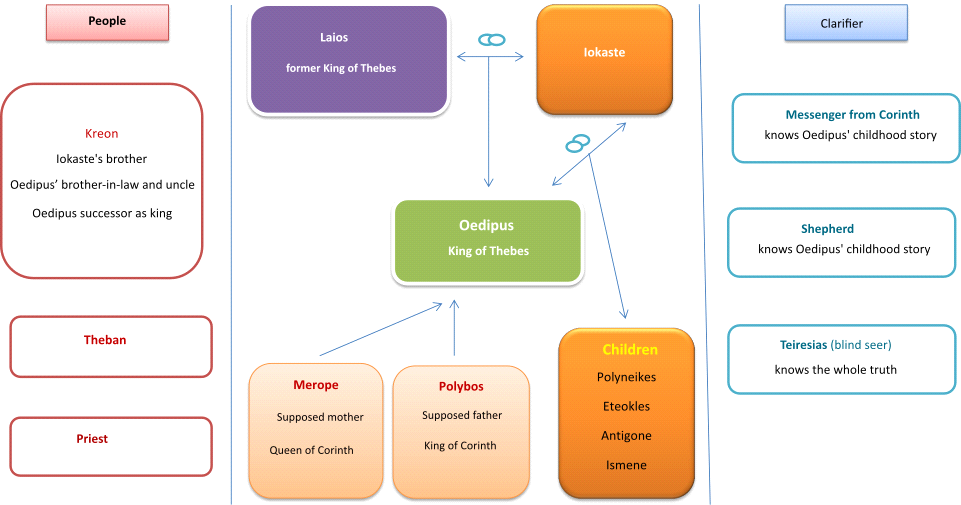 Below, you can take a look at Oedipus’ family tree, which will provide you with more information about the character.

Below, you can read an excerpt from our study guide:

Soon enough, Oedipus will realize that he himself is actually the cause of all evil. King Laius and his wife Jocasta had a child with each other despite all the warnings of the gods. According to the will of the gods, he should never have been conceived or born, and now great evil lies upon his city.

The warnings were clear: the child would one day kill his own father and marry his mother. Oedipus gradually realizes what his fate is: "a man who stands revealed as cursed by birth, cursed by my own family, and cursed by murder where I should not kill."

The text shown above is just an extract. Only members can read the full content.